Thinking about tying the knot? Get in touch to find out what our exclusive venue can offer..

Killian O’Donohoe is our Head Chef here at The Conyngham Arms. Since Killian joined the team in January 2015, he is relishing the challenge as he takes the food to a new level.

Strong emphasis on providing menus with seasonal influence and using local produce wherever possible, as well as the introduction of Afternoon Tea are just some of the exciting new changes introduced by Killian. 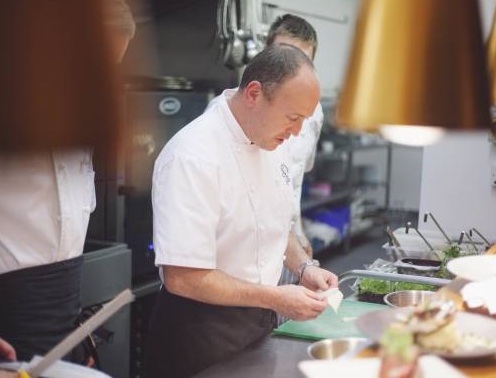 Killian has been a chef for 20 years, but his interest in cooking was sparked way before that. From a very young age he loved cooking and was inspired to become a chef by his mother. When he came of age, Killian ventured off to the Isle of Man to start his career, training/working there for 4 years.

Killian is not a Slane Native, and like most Chef’s has travelled a bit to gain experience under noted Chef’s until he headed up his own kitchens. He travelled around Europe exploring different food cultures before moving on to the Cayman Islands to join the renowned Chef Ottmar and his team.

After returning home and spending some time at another hotel in Co. Meath in a small village Kilmessan, Killian was ready for a new challenge and has really embraced his role in Conyngham Arms.  It would appear that the village life appeals to Killian, when asked what the best thing about Slane is, Killian biasedly said the Conyngham Arms of course! Also noting, ‘there is so much going on food wise in Slane’. Slane has a strong artisan food circle of producers in the area; goats cheese, hand reared pigs, Rapeseed Oil, are just a few to mention and Killian enjoys weaving these producers into the menu as it evolves.

Killian’s favourite and most popular dish on the menu at the moment is ‘Local Organic Turf Smoked Bacon’.  Killian’s theory is once the quality of the produce is good then it doesn’t need too much interference, but just be developed into something very appealing, complimented by the correct accompaniments and flavours. The Turf smoked bacon, sourced from local pork producer The Whole Hogg, is served with fluffy mashed potato and a rich cider gravy. A dish that is both substantial and most comforting to eat, really popular with the diners in the Hotel. 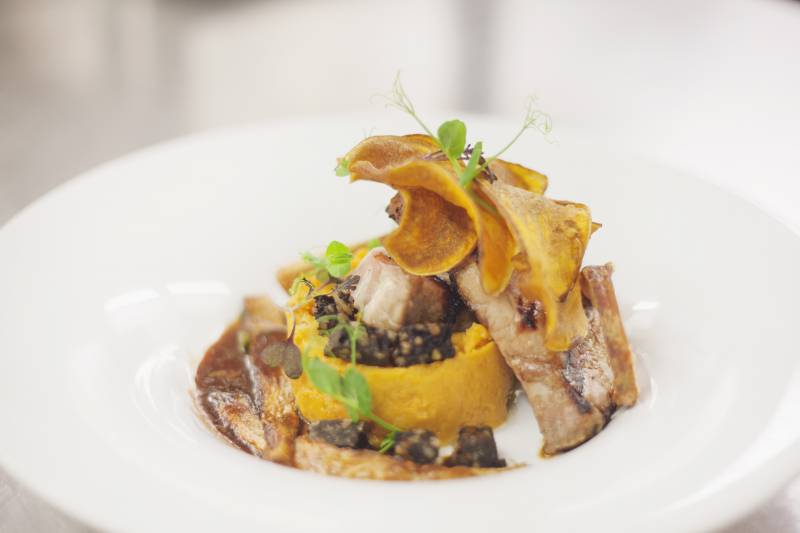 Killian and his team are happy to cater for all dietary requirements. All sauces on the menu are Coeliac friendly, and gluten-free breads and scones are available which can be incorporated into their popular Afternoon Tea option.

The restaurant has been awarded AA Rosette Award for Culinary Excellence and has been well received by Lucinda O’Sullivan, Killian himself has won Gold Medal awards for his cooking and was featured on American TV programme Great Chefs of America.